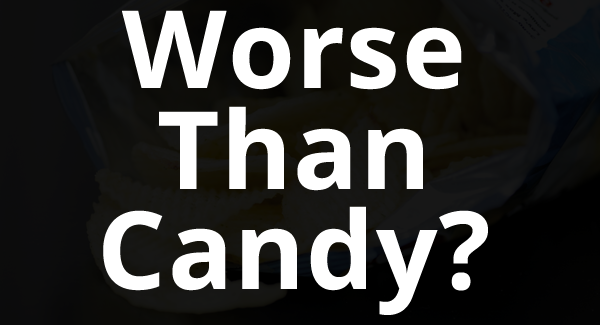 When we think of the foods most harmful to our teeth, we immediately think of candy.  Cavities are caused by bacteria in your mouth that creates enamel attacking acids. This bacteria feeds on sugars that exist in nearly everything we eat, and candy is one of the most obvious culprits.  But other foods can be just as rough on teeth, if not worse.

You may have been “tricked”.

Chips and crackers are often substituted for sweets because we think they are better for our teeth, and even people who are vigilant about brushing can be less likely to consider the negative effects of starchy foods.  Unfortunately, it’s not only obviously sweet foods that can cause trouble for teeth, but potato chips, crackers, and other starches are bad news as well. They become soft or sticky when chewed, and stay lodged in teeth long after the meal. Although they don’t necessarily taste sweet, the starches in crackers and chips are broken down into sugar by enzymes in the mouth.

Starchy foods like Chips can be worse than candy.

The American Academy of Pediatric Dentistry has stated that starchy foods may even be worse for your teeth than candy because of the length of time they stay on teeth long after snacking has ended.   As part of a national survey commissioned by the AAPD, it was discovered that 96% of U.S. adults with children under 12 thought a cracker was better for teeth than a piece of caramel.  The AAPD went on to say:

“The truth is that starches can lead to cavities just as sugars can, and caramels dissolve more quickly from the mouth than crackers…A cracker may be more figure-friendly, but it is not a teeth-friendly snack.”

Instead of potato chips or crackers, apple slices or celery can provide that satisfying crunch. Are there picky eaters in your family? A small amount of protein-dense peanut butter as a topping adds flavor if you or your children aren’t impressed with the substitution. Whatever you and your children snack on, be sure to brush for at least two minutes, twice every day!